An inverted trough (an elongated area of relatively low pressure) or cyclonic curvature maximum moving east to west across the tropics. These can lead to the formation of a tropical cyclone. Also known as an easterly wave.

A tropical weather system with organized convection (generally 100-300 miles in diameter) originating in the tropics or subtropics, having a non-frontal migratory character and maintaining its identity for 24 hours or longer. It may or may not be associated with a detectable perturbation of the wind field. 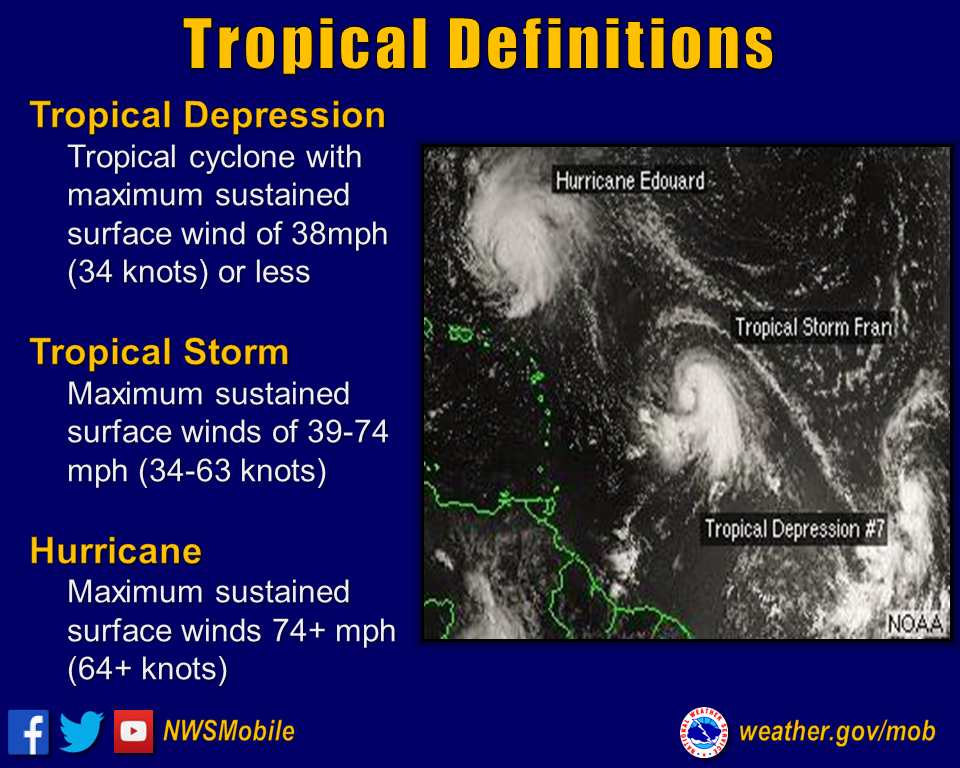 A tropical cyclone is a low pressure system (not associated with a front) that develops over tropical and sometimes sub-tropical waters and has organized deep convection with a closed wind circulation about a well-defined center.

A cyclone (of any intensity) for which the primary energy source is baroclinic (i.e., results from the temperature contrast between warm & cold air masses).

A class of post-tropical cyclone that no longer possesses the convective organization required of a tropical cyclone and has maximum sustained winds of less than 34 knots.

A non-frontal low pressure system that has characteristics of both tropical and extratropical cyclones. Subtropical cyclones originate over tropical or subtropical waters and have a closed circulation about a well-defined center. In comparison to tropical cyclones, the maximum winds occur relatively far from the center (greater than 60 nautical miles) and have a less symmetric wind field and distribution of convection.

A tropical depression is a tropical cyclone that has maximum sustained surface winds (one-minute average) of 38 mph (33 knots) or less.

A tropical storm is a tropical cyclone that has maximum sustained surface winds ranging from 39-73 mph (34 to 63 knots).

A hurricane is a tropical cyclone that has maximum sustained surface winds of 74 mph or greater (64 knots or greater).

NOTE: The number of Tropical Storms and Hurricanes increases substantially in August, peaks in mid-September and decreases towards a minimum by early November.

A Tropical Storm Watch is issued when Tropical Storm conditions, including winds of 39-73 mph, pose a POSSIBLE threat to a specified coastal area within 48 hours.

A Tropical Storm Warning is issued when Tropical Storm conditions, including winds of 39-73 mph, are EXPECTED in a specified coastal area within 36 hours or less.

An organized band of cumulonimbus clouds immediately surrounding the center of the tropical cyclone.

An abnormal rise in sea level accompanying a tropical cyclone. This is the difference in height between observed level of the sea surface and the level that would have occurred in the absence of the storm. Storm surge is usually estimated by subtracting the normal or astronomical tide from the observed storm tide.

The water level rise resulting from the astronomical tide combined with the storm surge.